John Chalmers was born on 1st October, 1815 in Cupar, Fife, Scotland as the sixth child of Carter David Chalmers and Isabella Kilgour. He had nine siblings, namely: Isabella, Margaret, Bettie, Peter, Elisabeth, Jean, Christian, Agnes and Helen, who had been born at various locations around Fife: Leuchars, Cults and Cupar.

At the time of the 1841 Census (7th June) John Chalmers (25) was employed as an Agricultural Labourer and was residing with his parents, David and Isabella both 55 years old. David was employed at a Linen Thrower. Also resident were Jane (25), Agnes (20) and Helen (14), all three employed as Flax Spinners. The family was residing at Haugh Mill, just south of the village of Windygates in the Parish of Markinch in Fife. 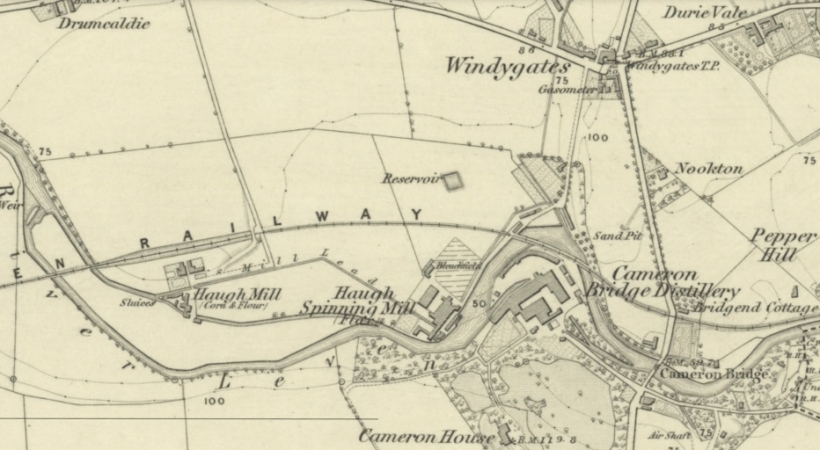 WINDYGATES, a village, in that part of the parish of Markinch which formed the late quoad sacra parish of Milton of Balgonie, district of Kirkcaldy, county of Fife, 2 miles (E. S. E.) from the village of Markinch; containing 120 inhabitants. This village lies in the south-eastern part of the parish, bordering on the parish of Kennoway, and is on the high road from Markinch to Leven. A little to the south flows the river Leven, which turns various paper and other mills; and in the vicinity, at Cameron bridge, is an extensive distillery.

The neighbouring Cameron Bridge Distillery was founded in 1824 and the distillery exists on the same site to this day, owned by Diageo.

The Haugh Mill would have referred to the immediate community rather than the mill buildings per se. The Haugh Spinning Mill (Flax) would have been where John's father and three younger sisters worked.

1/4 Mile S.W. of the Village of Windygates.
Several lofty stone buildings etc. in which Flax & Tow are manufactured into various articles of use. The Mill is driven partly by water & partly by Steam each equals 30 Horse power. and employs 152 females & 31 Males. the former earn from 2 to 5/6 (shillings), the latter from 9/- to 20/-. Situate on the N. Side of the River Leven Near Cameron Bridge Distillery

Elizabeth Downs, daughter of Baker William Downs and his wife Elizabeth Martin was born in Falkrk in around 1820. At the time of the 1841 Census (7th June). Elizabeth (22) was residing at Longcroft, Parish of Denny in Stirlingshire with her mother Elizabeth (70) and brother Police Officer William Downs (30).

Some time after the 1841 Census, John Chalmers left the family dwelling at Haugh Mill in Fife and fate led him to Longcroft where he met Elizabeth.

When John was 29, he married Elizabeth Downs, then aged about 24 in the Parish of Denny on 9th November, 1844, no doubt at Longcroft.

At the time of the 1851 Census (31st March) John Chalmers were residing at Shedding Road in the parish of Denny. John (38) was employed as a Publican. Also resident were his wife Elizabeth (35), and their children David (6), John (4) and Isabella (2).

The Shedding was the gushet at the west end of Longcroft and it would have been close to that where the Chalmers family resided. Today, a WWI War memorial stands at that gushet.

William Chalmers, named after his maternal grandfather, was born on 4th May, 1851, Robert Hutton Chalmers was born on 1st May, 1853 and Jean Chalmers born on 23rd March, 1855, all in Denny.

Soon after this John and Elizabeth moved their family from Denny some 1½ miles to the west to Wyndford in the County of Dunbartonshire where youngest child Peter Chalmers was born on 6th December, 1857. John registered his son's birth and gave his occupation as Labourer.

Wyndford Lock was situated on the Forth & Clyde Canal about 1½ miles north of the village of Cumbernauld. 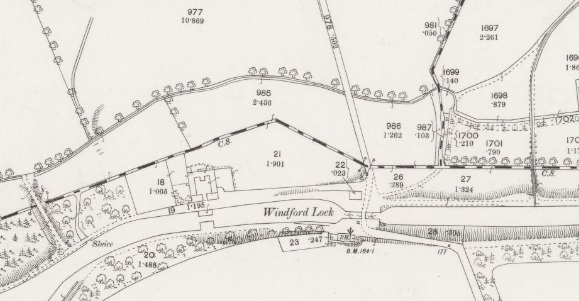 1859 Map of Wyndford Lock, birthplace of Peter Chalmers in 1857.National Library of Scotland

The 20th Lock numbering from Grangemouth - the western extremity of the navigation, on the "Forth & Clyde Canal", by which a fall of 6 feet, from the west side, is got over. There is a Drawbridge here near the centre of the Lock. A Parish Road crosses this Bridge. It is said that the name "Windford", sometimes spelt Wyndford, originally - before the Canal was made, belonged to the place about the Bridge, but since the Lock &c. was made the name seems to have been, as it is at present, entirely used to the Lock. All the houses near the Bridge, with the exception of the Public House on the South, belong to the Canal Co. but the name of the Lock is given generally to the whole. The houses west of the Lock were formerly stabling, but are now let in tenements.

A Farm Steading, the property of Captain Murray Gartshore of Gartshore, Kirkintilloch. This is an old and well known name in the country surrounding.

At the time of the 1871 Census (3rd April), the family had moved from Auchinstarry to Binniehill Hamlet in Slamannan, Stirlingshire.

Binniehill, a village in Slamannan parish, Stirlingshire, on the Slamannan railway, in the south-western vicinity of Slamannan station. Pop. (1871), together with Southfield, 584. 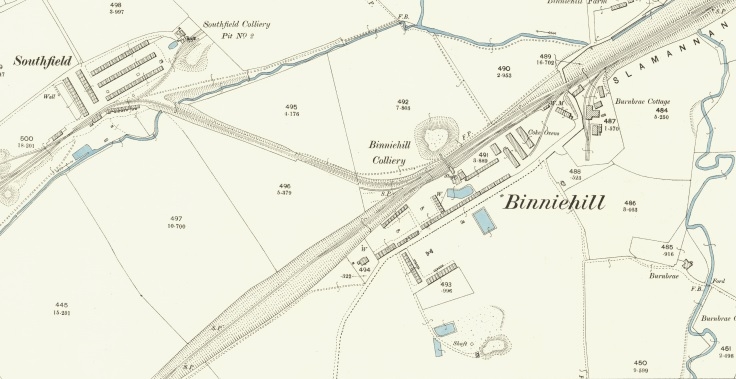 John was (54) and employed as a Colliery Stoker and Elizabeth was 52. Second son John (23) and William (19) were Colliery Engine Keepers, Jane (16) was a Domestic Servant while Peter (13) was, like his father, a Colliery Stoker. Also recorded was a 21-year-old Dressmaker, Elizabeth, stated to be the daughter of Head of Household John. This appears to be either a recording error or a change of name because we believe this to be Isabella. Finally, Elizabeth, the 1-year-old granddaughter of John and Elizabeth was present. This was the daughter of Isabella Chalmers who had been born in Slamannan to an unnamed father on 15th December, 1869.

In the adjacent dwelling in Binniehill Hamlet was eldest son David Chalmers (26), also employed as a Colliery Engine Keeper, his wife, Falkirk-born Elizabeth (21) and their 2 young children Agnes (3) and John (1), both born in Slamannan. David Chalmers had married Elizabeth Marshall in Falkirk on 12th July, 1867.

John Chalmers died, aged 60, of Cardiac Dropsy and Nephritis on 17th February, 1876 at West Longrigg, some 2 miles south west of Binniehill. His youngest son Peter reported the death and gave his father's occupation at the time of his death as Labourer. 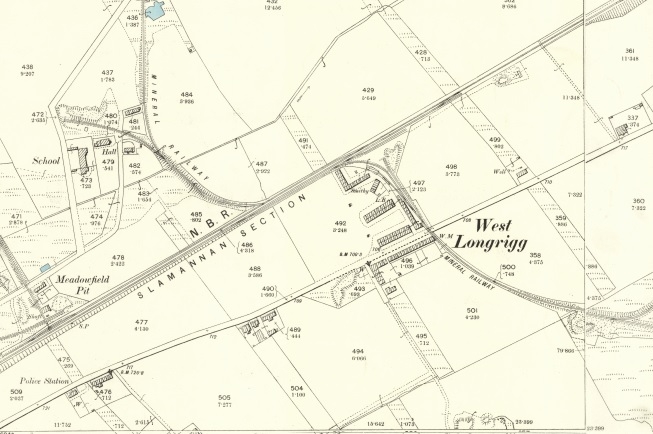 At the time of the 1881 Census (4th April) the widowed Elizabeth Chalmers (62) was residing in Kilsyth Burgh at High Craigends with two granddaughters, Elizabeth (12) and Jean (9). Both the daughters of Isabella Chalmers and born in Slamannan.

Elizabeth Chalmers née Downs died aged 71 on 3rd March, 1890 in Brownrigg, Slamannan. Her death was registered by her eldest son David Chalmers and the Cause of Death was Paralysis and Old Age. Her late husband John Chalmers' occupation was recorded as Pitheadman.